In the last month I discovered two things that changed my life: audiobooks and Yuval Harari. The former completely transformed my daily commute, the latter changed the way I think about the surrounding world (with more appreciation for history and politics, to say the least). The cocktail of the two made my brain cells sing.

My opinions aside, what do other readers think about his books? Let’s dig into it by scraping Amazon reviews of “Sapiens” and then visualising their most common words in a wordcloud.

The web-scraping procedures that follow were shamelessly “borrowed” from Riki Saito’s blog. Thanks, mate!

The following code requires Amazon’s product code, which can be found in the product’s URL. Next, it scrapes the product’s name, just to confirm we got everything right!

So far, so good. Now, after sourcing amazon_scraper function from Riki’s Github page, I import first 50 pages of reviews of Sapiens:

It looks like everything worked! The returned data frame contains not only date, title, author and content of every review, but also number of stars given, format of the book that the review is for and even the number of people that thought this particular review was helpful, priceless!

As you can tell, it’s not in the best shape for the analysis: it contains punctuation signs, numbers, lower and upper letters, etc. Let’s sort it out by doing some text pre-processing:

I also removed some uninformative words, together with English stopwords, to make the results clearer:

Let’s have a quick peek into the top 20 most frequent words:

creating a wordcloud with the top 250 most frequent words 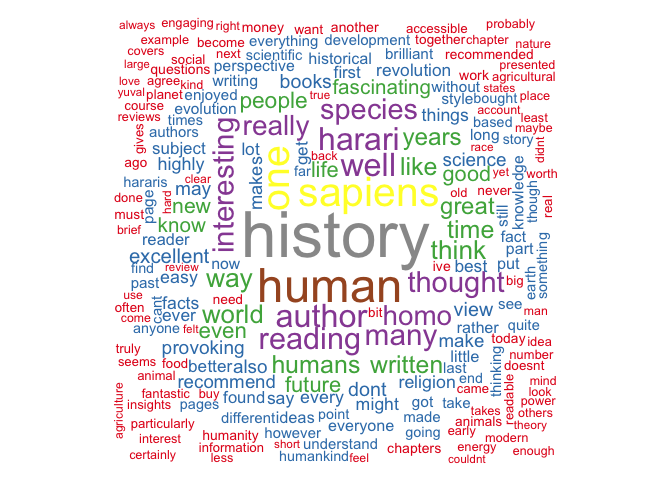 As pretty as it looks, it’s not too informative regarding how positive / negative the reviews were. For this, in my next post I’ll run a sentiment analysis on reviews of both books, so watch this space!